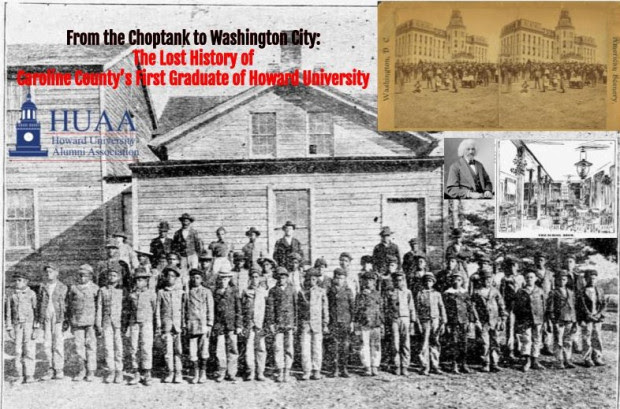 Lost History Associates, in partnership with the Greensboro Historical Society, present, “From the Choptank to Washington City: The Lost History of Caroline County’s First Graduate of Howard University”

Established in the nation’s capital in 1867, Howard University was founded as an integrated and co-ed institution of higher learning supported by Tuckahoe native Frederick (Bailey) Douglass, who served on the Board of Trustees from 1871 until his passing in 1895. During his quarter-century of service to the university, Douglass welcomed and supported students from all over the country, including those from familiar families of his native Eastern Shore.

Join the Greensboro Historical Society for a groundbreaking presentation and discussion on the ongoing research into the life and times of Greensboro native Dennis F. Groce (Class of 1889), Caroline County’s first graduate of Howard University in Washington, D.C.,

John Muller, author of Frederick Douglass in Washington, D.C.: The Lion of Anacostia (2012) and Mark Twain in Washington, D.C.: The Adventures of a Capital Correspondent (2013), has presented widely throughout the DC-Baltimore metropolitan area and Eastern Shore. Muller has been featured on C-SPAN’s BookTV and C-SPAN’s American History TV, in the pages of the Washington Post and Star Democrat, airwaves of NBC4 (Washington) and WBAL (Baltimore) and radio stations WPFW (Washington), WAMU (Washington), WYPR (Baltimore), WEAA (Baltimore) and Delmarva Public Radio (Eastern Shore). For the past decade Muller has contributed hundreds of articles to local and national print and online news sources, including the Washington Informer. Muller is a co-founder of Lost History Associates.

Justin McNeil, an IT professional who has serviced government agencies, nonprofits, corporations and small-businesses within the DC-Baltimore metropolitan areas and Delmarva Peninsula for the last decade, is a doting husband and father of 3, street historian, essayist, and playwright. McNeil has been featured in the pages of the Washington Post, contributed columns to the Washington Informer and been interviewed on News Channel 8 (Washington), WBAL (Baltimore) and WPFW (Washington) and WEAA (Baltimore). McNeil attended Morehouse College in Atlanta, Georgia and is a co-founder of Lost History Associates.

Note on Reservations and the Greensboro Historical Society

Attendance and/or reservations are limited to 30 attendees. Seating will be accommodated on a first-come, first-serve basis.

There will be a minimal charge at the door and/or suggested donation to support ongoing programs and operations of the Greensboro Historical Society.