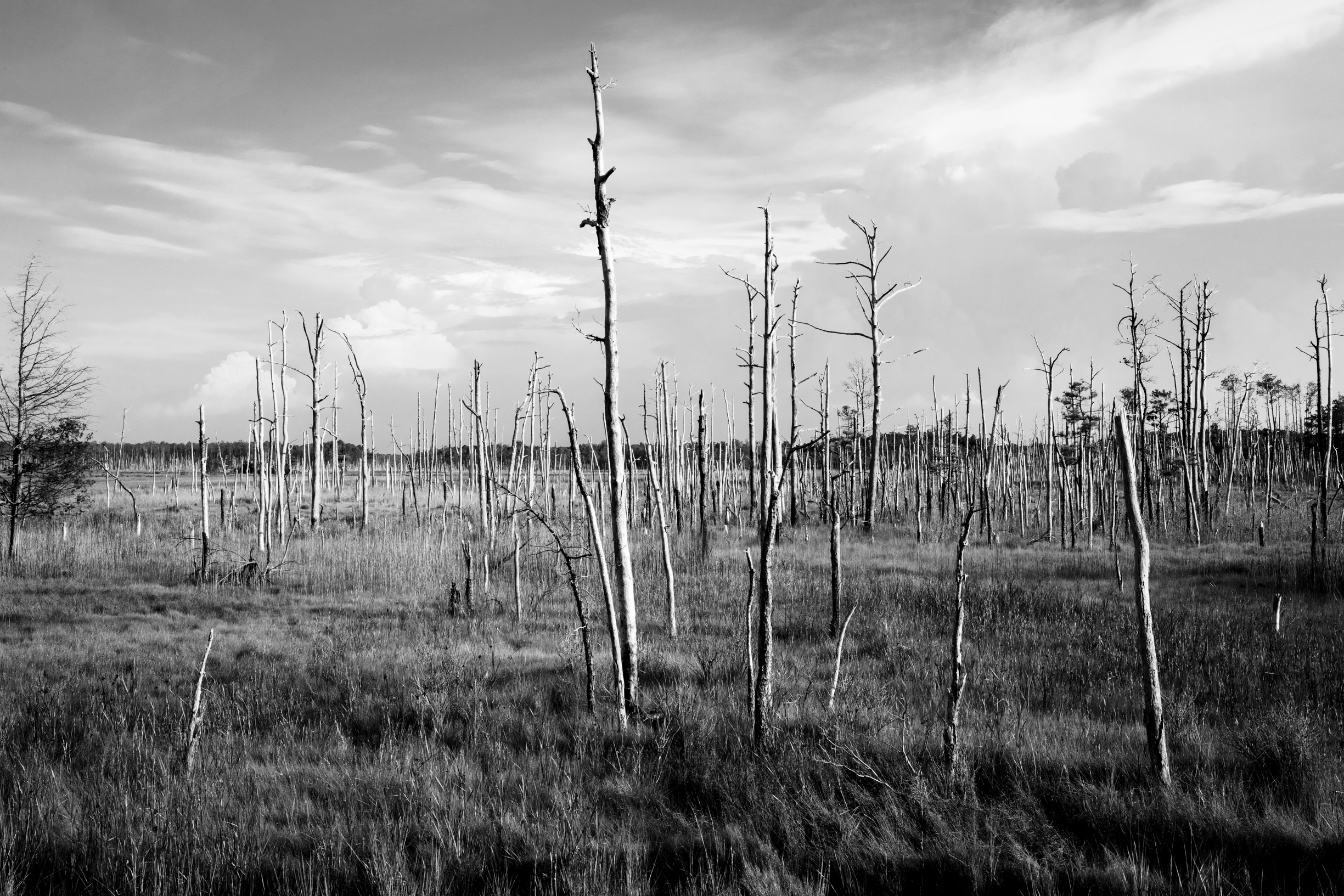 Ghost Forest, Photographs by Geoff Delanoy, on View Through December at Adkins Arboretum

The bare trunks of loblolly pines reach toward the sky at slightly tilting angles in Ghost Forest, Geoff Delanoy’s achingly beautiful show on view through Dec. 23 at Adkins Arboretum. In this elegant series of large black-and-white photographs, Delanoy explores an increasingly familiar sight—the “ghost forests” that are left as rising water causes tidal marshes to take over where trees once flourished. There will be a reception to meet the artist on Sat., Nov. 12 from 2 to 4 p.m.

Delanoy became interested in the vulnerability of coastal landscapes to climate change while working for more than a decade on a series of photographs called Fugitive Landscapes. Photographing the Northern California coast at Point Reyes National Seashore, he began over time to notice day-to-day changes in the landscape and tides. Curious, he started to research predictions about the impacts of climate change on the California coast, a project that soon led him to think about what might be happening closer to his home in Baltimore.

“I became aware of climate change in the Chesapeake Bay,” he explained, “and how ghost forests were a very visible manifestation of changes in the environment with sea level rise.”

Delanoy serves as a professor and the chair of the art department at Notre Dame of Maryland University. Since 2018, he has been photographing the coastal landscapes of Maryland and Delaware, with a particular focus on Dorchester County. Full of nuance and intricate textures, his images reveal the grace and individuality of trees struggling with sea level rise. In one photograph, a single tree, bare branched and bent by years of wind, leans out across a seemingly endless expanse of marsh. In another, a fallen trunk lies at the edge of the water where a low, still-forested island in the distance is hardly more than a dark stripe on the horizon.

For most of his projects, Delanoy has worked in black and white, but when he started his Ghost Forest series, he tried photographing in color, thinking that the realism of color would convey the threat of climate change more strongly. But he changed his mind.

“As I worked through these series, I found the cool earth tones of the landscape of the shore too peaceful and visually pleasing to convey the urgency of the climate crisis,” he said. “The images have a more immediate impact in monochrome.”

Perhaps the most arresting photograph in the show is a shot from 2019 in which puffy clouds are reflected in a flooded road leading through a marsh to a distant stand of trees. Seemingly playful and happy, the clouds are a direct contrast to the destructive threat silently posed by the calm, smooth water.

“The trees bear witness to the landscape and communicate on a visceral level,” Delanoy said. “Hopefully the photographs strike a balance between the inherent beauty found in nature but also motivate us to change course with the great losses that we face because of climate change.”

This show is part of Adkins Arboretum’s ongoing exhibition series of work on natural themes by regional artists. It is on view through Dec. 23 at the Arboretum Visitor’s Center located at 12610 Eveland Road near Tuckahoe State Park in Ridgely. Contact the Arboretum at 410–634–2847, ext. 0 or info@adkinsarboretum.org for gallery hours.