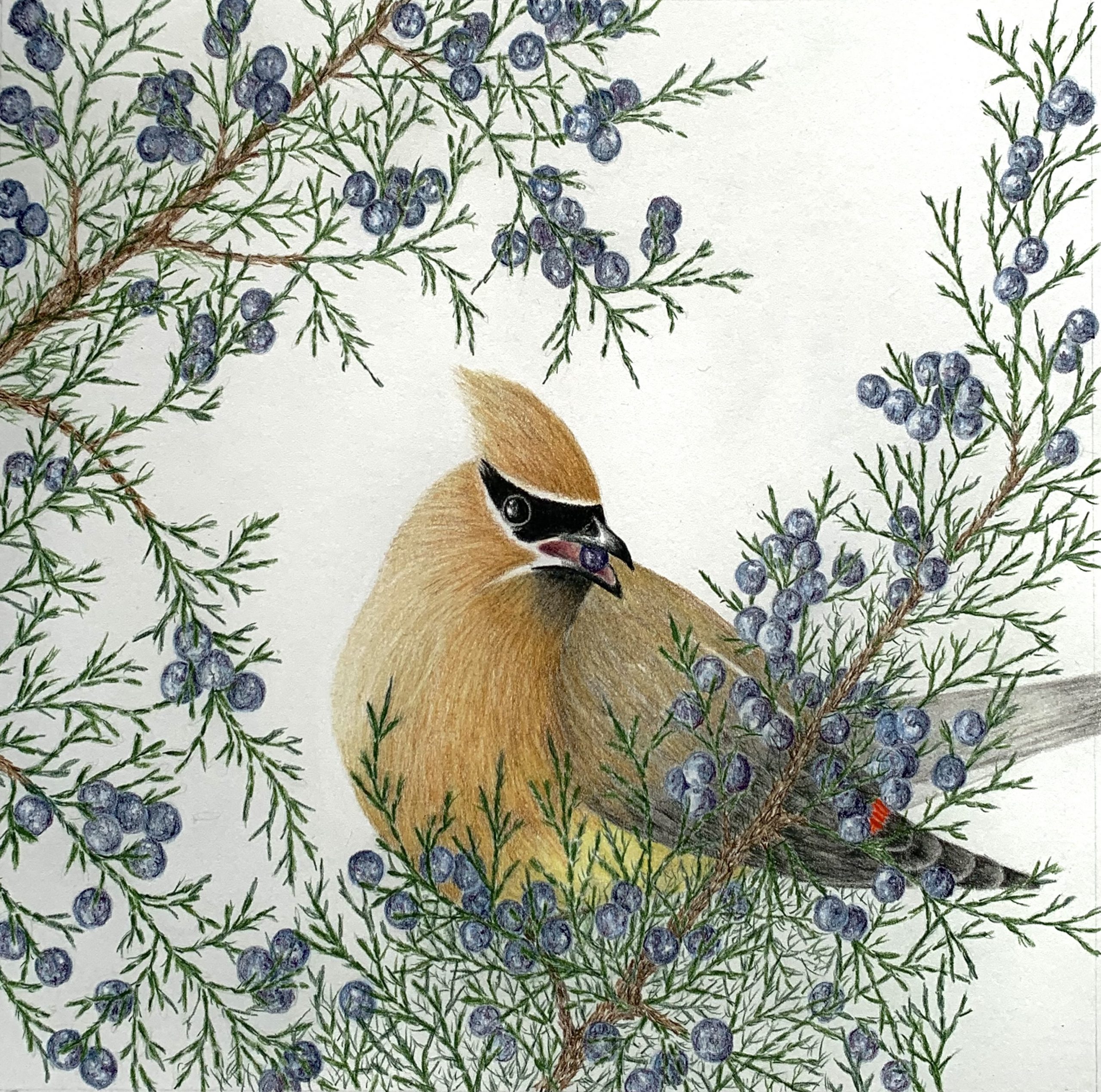 Land as Teacher, Healer, Sustainer, works by Botanical Art League of the Eastern Shore Members, on View at Adkins Arboretum

By Christina LippincottJanuary 9, 2023No Comments

The golden brown feathers of a perky cedar waxwing glow from behind dark, lacy cedar needles dotted with tiny blue berries in an unusual show in the Adkins Arboretum Visitor’s Center. On view through Feb. 24, Land as Teacher, Healer, Sustainer is more than just a show of exquisitely crafted botanical art. It’s a celebration of the plants that sustained the native peoples of the Chesapeake region for centuries before the arrival of Europeans. There will be a reception to meet the artists and learn more about this project on Sat., Jan. 14 from 2 to 4 p.m.

Created by 11 members of the Botanical Art League of the Eastern Shore, this show was inspired by the Indigenous Peoples’ Perspective Project, a collaboration between Adkins Arboretum and the Washington College Food Initiative. Focusing on 21 native plants used for food, crafts and medicine by the indigenous peoples of the Chesapeake region, the project aims at honoring their traditions and teaching about how their lives were intricately tied to the land and the plants that grow there.

Some are still used for food, including the blackberries in Sharon Weaver’s energetic watercolor of berries in every stage from unripe green to pink to the dark purple of ready-to-eat fruit. You’d be correct if the peeling bark of a river birch tree, drawn in precise and nuanced shades of graphite by Robert G. Hammond, makes you think of birchbark canoes, but a look at the informative list provided in the gallery will tell you that river birches also provided sap that was boiled down to make a sweet syrup and medicine to treat colds and stomach pain.

The Arboretum began offering classes in botanical art in 2006, and this program has become increasingly popular. In 2021, to address this interest, instructors Lee D’Zmura and Anna Harding co-founded an independent group, the Botanical Art League of the Eastern Shore, for artists interested in studying and developing their skills in botanical art.

“Many of the members who came to our first meeting said they were looking for inspiration and encouragement,” said Harding, the show’s organizer. “It seemed to me that a group project on an important theme might inspire people in their work, and I thought of the Indigenous Peoples’ Perspective Project.”

Harding proposed a show featuring the IPPP’s 21 plants, all of which grow at the Arboretum and on Washington College’s campus. Using detailed descriptions of the attributes and traditional uses of these plants listed on the IPPP’s webpage, members of the League began studying them and walking the Arboretum trails to observe them growing throughout the seasons

Each artist chose one or more species to draw or paint, often with an eye to catching the plants at crucial stages of their annual cycles. In Sarane McHugh’s pastel drawing, a trio of ripe persimmons seems ready to burst with sweet, succulent juice, while Robin Herman’s colored pencil drawing captures the rich shades of deep red, earthy green and brown of a white oak’s autumn leaves.

Martha Pileggi followed milkweed through the seasons in her pair of watercolor and colored pencil works that reveal tiny details of the plant’s purple-pink blossoms from buds to mature flowers and the pale green of ripening pods to a dried pod filled with seeds and silky fluff. There is another surprise here. While it’s become common knowledge that monarch butterflies will not survive without milkweed, their host plant, few of us know that the region’s native peoples also depended on milkweed for food and medicine, even gathering the gossamer fibers attached to its seeds to use as pillow stuffing.

“It’s our hope that this show will help visitors become aware of the incredible creativity and ingenuity of the ancient people who used these 21 plants in their daily lives,” Harding said. “And that, by looking closely at the artwork, people will be inspired by the beauty of botanical art and the talent of our art league members.”

This show is part of Adkins Arboretum’s ongoing exhibition series of work on natural themes by regional artists. It is on view through Feb. 24 at the Arboretum Visitor’s Center located at 12610 Eveland Rd. near Tuckahoe State Park in Ridgely. Contact the Arboretum at 410-634-2847, ext. 100 or info@adkinsarboretum.org for gallery hours.