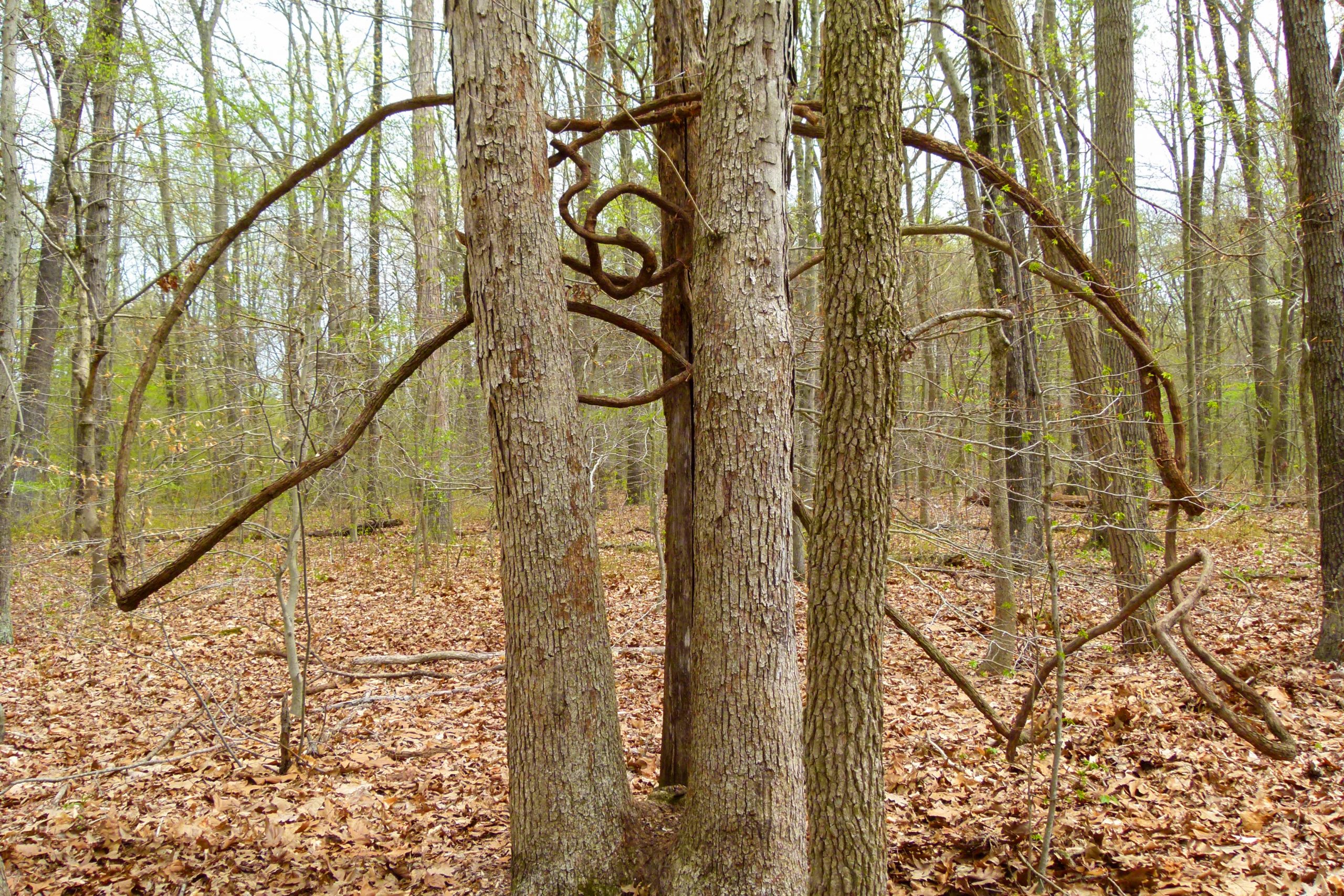 Re-Vision, Environmental Sculpture and Poetry by Howard and Mary McCoy, on View Through September at Adkins Arboretum

Like enormous 3-D drawings, vines sweep and spiral, bend and corkscrew around the trees in Howard and Mary McCoy’s outdoor sculpture exhibit, Re-Vision, at Adkins Arboretum. Interspersed with Mary’s poems directly inspired by the Adkins landscape, they are on view through Sept. 30. On Sat., June 4, from 2 to 4 p.m., there will be a reception for the McCoys’ outdoor show and Chinese painter and calligrapher Kit-Keung Kan’s exhibit in the Visitor’s Center, including a guided sculpture and poetry walk.

Grapevines swirl up from the forest floor in “Reconfigure,” and pale bittersweet vines twirl in wide arcs around a tree trunk in a tall sculpture called “Reorganize.” Nearby, a poem called “Not for the Faint of Heart” is wrapped around the prickly trunk of a devil’s walking stick plant.

These two Centreville artists have served as Resident Artists at the Arboretum for more than two decades, helping with the art program and periodically exhibiting their own work. This is their twelfth show of site-specific sculpture and the first to include several of Mary’s poems.

A map showing the location of the sculptures is available in the Visitor’s Center, and each sculpture is marked with a bright blue sign on the ground. To find the poems, however, you must keep an eye out for the same blue—perhaps on a tree, a signpost or even the railing of one of the wooden bridges that cross the Arboretum’s stream.

“I want the poems to be surprises that you come upon unexpectedly,” said Mary, who is a 2022 recipient of a Regional Individual Artist’s Award in Literary Arts from the Maryland State Arts Council. “For me, they were gifts from the landscape itself—feelings and ideas that came to me while I was walking through the forest or just sitting quietly on a log.”

The McCoys also walked the forest paths together, keeping an eye out for vines growing up into the treetops.

“Vines are like three-dimensional drawings,” Howard explained. “We both used to like to draw and paint a lot. It’s sort of like the paintings of Jackson Pollock or some of the other Abstract Expressionist painters—gesture painting. It has art historical context, and it’s sometimes hysterical what it ends up doing.”

The two artists chose to call their show Re-Vision not only because their work offers new ways of seeing nature, but also because they have “revised” the way the vines were growing and because both the vine sculptures and Mary’s poems were created by experimenting with trying one thing, then another, revising each work until it finally felt lively, balanced and whole.

As to why they cut vines out of the trees, Howard said, “We’ve talked about it with a couple visitors who came by while we were working—the importance of clearing vines off the trees so that you save the tree from the choking vines, and at the same time, you’re making sculpture, making art.”

“They are wonderful materials,” Mary said. “But you have to follow what they dictate. You want it to curve one direction, but because of the way it grew with an elbow or some tight curvature, it’ll want to go the exact opposite. So it’s a real collaboration with nature. We feel like the idea of collaboration is important not only when we’re making art in nature but in the larger context, that if we all were more interested in collaborating with nature instead of dominating it, we might be better off.”

Re-Vision is part of Adkins Arboretum’s ongoing exhibition series of work on natural themes by regional artists. It is on view through Sept. 30 at the Arboretum, located at 12610 Eveland Road near Tuckahoe State Park in Ridgely. Contact the Arboretum at 410–634–2847, ext. 0 or info@adkinsarboretum.org for more information.